Beginning January 1, 2013
all Reviews may be found here.
Stop by the new site and take a look around.

However Long the Night by David Pereda 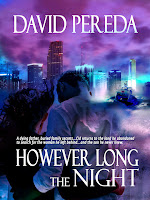 Cuban-born, award-winning Miami Architect and successful real estate developer Cid Milan suddenly faces a dilemma when his dying father reveals to him a shocking twenty-five year old family secret. Cid realizes there is only one thing he can do to unravel the mystery of his own past and right the wrongs committed. He must return to the land he abandoned. In his quest, Cid rediscovers himself and his roots as he searches frantically throughout Cuba for his teenage flame, Sandra, and the secret she kept from him all these years. In the process, Cid learns an invaluable lesson about love, forgiveness and redemption which changes his life forever.


However Long the Night was a gritty, incredibly realistic portayal of life for Cid Milan, a Cuban who came to America more than twenty years prior to the story's real beginning.  Cid wasn't always the most heroic of heroes, at least not at the start.  I admit I struggled to like him for the first several chapters.  He's arrogant, selfish and I wasn't overly impressed with his moral compass (especially about what caused an estrangement between him and his brother, Manny).  Still, as time and pages passed, it became clear that Cid was molded by his past and that underneath the outer layer was a man with a good heart and a sense of right and wrong.  I may not have always agreed with his behavior or choices, but I understood the reason why he acted the way he did.

This story is layered with conflict over conflict, from the discovery of a family secret and Cid's decision to return to Cuba and the things he learns there, to the internal machinations of people looking to betray Cid within Cid's own company.  There's so much going on sometimes, it leaves the reader breathless.

I thorougly enjoyed reading about Cuba. For most of us here in America, Cuba is a land of mystery. We know little about it, and Mr. Pereda certainly embued his story with loads of information about the country:  its sights, sounds and people -- the good and the bad.

I think the story really gained traction once it entered Cuba. More questions were posed, intrigues about Cid's father's past there and the hunt for Sandra, the love of Cid's young life and mother of the son he never knew.  The author writes with flavor and sensual detail.  Occasionally, it slowed the story, but the reader is never truly bored.  Perhaps it's only because we have so many questions and worries that we get frustrated when things don't move forward quickly enough to satisfy the need to discover just what's going to happen.

Overall, though, I recommend However Long the Night, not as a romance as it's billed by the publisher, though there are romantic elements, but as a fascinating suspense with a Cuban flavor and a completely satisfying ending.

Posted by The Long and the Short of It Admin at 3:30 AM

Trouble in a Big Box

A Teeny Bit of Trouble

1 Star— At this time, we at LASR do not post these reviews. If the book was boring, badly edited, poorly written, had little or no plot, stilted dialogue, and/or unsympathetic characters, we will decline the review.

2 Stars— Not wonderful, but tolerable. There may be some minor editing glitches but not enough to stop you reading. Not a wall-banger, but nothing you'd re-read. This is a book you would borrow from the library - not buy - and never check out again.

3 Stars— Good. Mostly enjoyable. You made it through and didn't consider it a waste of time or money. The story was strong enough or the conflict tight enough, so even when the book faltered, it was able to draw you back in and keep you. There's a chance you'll recommend it to a friend, but it wouldn't go on your keeper shelf.

4 Stars— Very Good. You're glad you were the one who got to review the book. You would probably buy it and would definitely recommend it to your friends. You liked the characters and the plot. The writing style was good and the editing clean.

LASR Best Book - For a book or story that is truly exceptional. You think about it when you're not reading it. You wonder what happens to the characters when you finish. You would absolutely buy everything else this author had to offer. The highest praise - and reserved for only a few.

In compliance with FTC Guides Governing Endorsements, Testimonials, etc., please be advised that the majority of the books The Long and the Short of It reviews are provided free of charge by various publishers and authors, though we also review many books from the library or self-purchase.

Additionally, please note that we participate in an affiliate program with Amazon.com and Barnes and Noble and we earn a small commission on most purchases that are bought through our links.